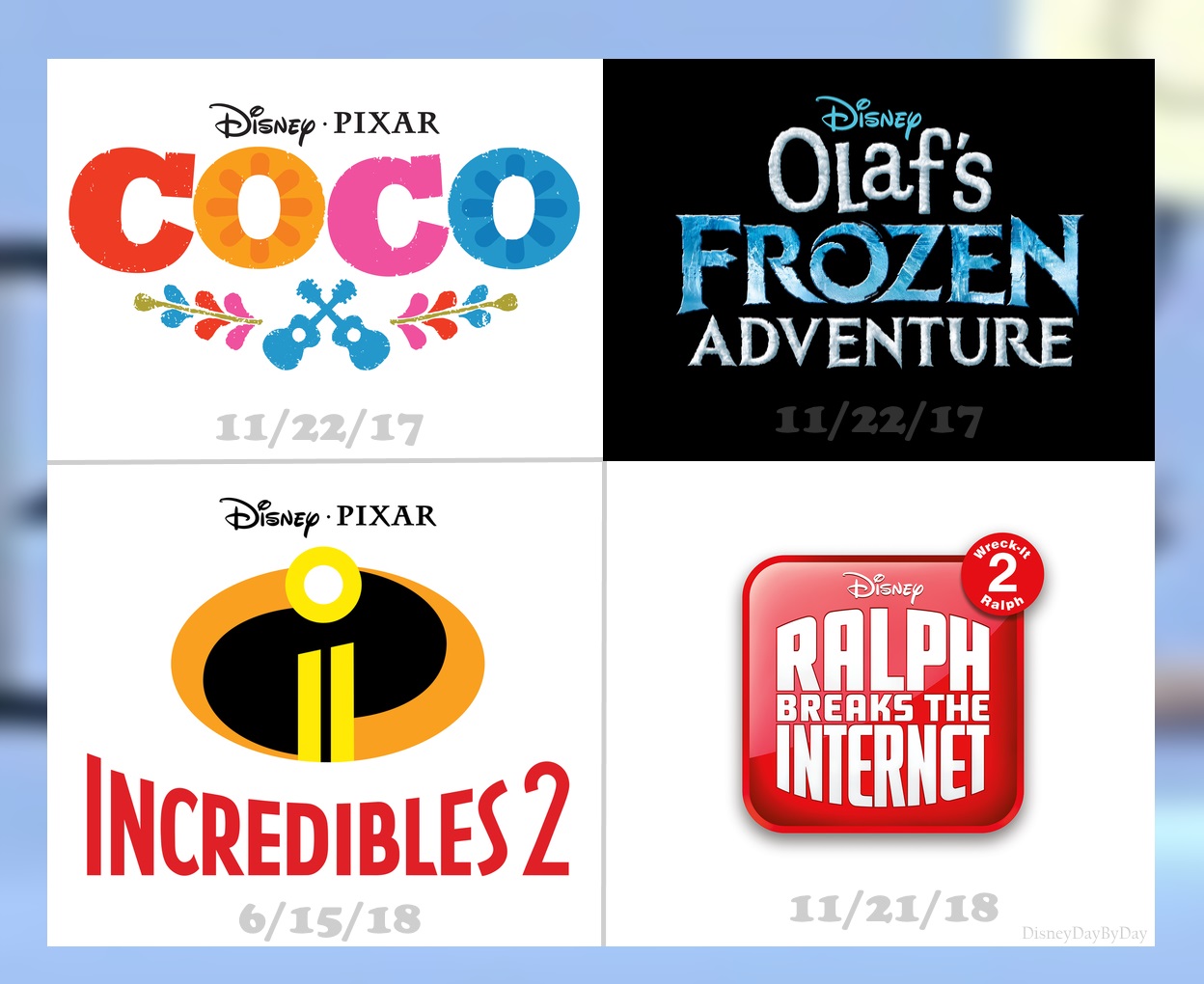 John Lasseter, chief creative officer of Pixar and Walt Disney Animation Studios, teamed up with the stars and filmmakers from both studios to present new details, footage, behind-the-scenes looks and images from a host of upcoming films. “I’m so excited about our upcoming movies; they are all hilarious, emotional, beautiful and make you think,” said Lasseter, who serves as executive producer on all animated titles. “It’s a great mix of incredibly creative and surprising new worlds and characters and stories we love returning to. Our filmmakers are putting so much heart into these films – I can’t wait for people to see them.”

Following, in the order of release, are the films presented on behalf of both studios.

Guests were treated to the first-ever public performance of “Remember Me” from Pixar Animation Studios’ upcoming feature film “Coco.” Anthony Gonzalez, who provides the voice of Miguel in the film, and Benjamin Bratt, who lends his voice to Ernesto de la Cruz, teamed up to perform the song written by Kristen Anderson-Lopez and Robert Lopez. Capping the animation presentation, the grand finale featured more than 160 performers who descended upon Hall D23 at the Anaheim Convention Center, including the Grammy-winning Mariachi Divas de Cindy Shea and Ballet Folklorico de Los Angeles under the direction of Kareli Montoya, and the Grammy®-winning Gordon Goodwin Big Phat Band.

“Our film embraces a broad landscape of music,” said director Lee Unkrich. “We were fortunate to have Kristen and Bobby create ‘Remember Me’—it’s the signature song made famous by Ernesto de la Cruz, and it embodies the key theme in our story: the importance of remembering loved ones both in life and beyond.”

Unkrich, co-director and screenwriter Adrian Molina and producer Darla K. Anderson shared details about the original story with the crowd. In theaters Nov. 22, 2017, “Coco” introduces Miguel, an aspiring musician whose family long ago banned music. Desperate to prove his talent and follow in the footsteps of his idol, Ernesto de la Cruz, Miguel makes a fateful decision and finds himself in the Land of the Dead, where he meets his extended family and charming trickster Hector (voice of Gael García Bernal). Together, they set off on an extraordinary journey to unlock the real story behind Miguel’s family history.

“Coco” features an original score from Oscar®-winning composer Michael Giacchino (“Up,” “Rogue One”) and additional songs co-written by Germaine Franco (“Dope,” “Shovel Buddies”) and Molina. Also part of the team is musical consultant Camilo Lara of the music project Mexican Institute of Sound.

Kristen Bell, the voice of Anna, introduced fans to the new “Frozen” holiday featurette, “Olaf’s Frozen Adventure.” Josh Gad, the voice of Olaf, surprised the crowd with a live performance of the all-new original song “That Time of Year,” written by Elyssa Samsel and Kate Anderson. The song is part of Walt Disney Animation Studios’ new 21-minute featurette, which hits the big-screen in front of Disney•Pixar’s “Coco” on Nov. 22, 2017.

Lasseter, who’s looked forward to the return of everyone’s favorite family of superheroes since “The Incredibles” was still in production, was excited to share with fans a look at what the fashion world thinks of super-suit stylist Edna Mode—the petite-but-powerful character introduced in Pixar Animation Studio’s 2004 Oscar®-winning feature. Showcasing fashion phenoms from Heidi Klum and Kendall Jenner to Zac Posen and Rachel Zoe, the video can be viewed here.

“Incredibles 2” director Brad Bird—who lends his voice to Edna—joined Lasseter on stage to welcome to the festivities the voices of Mr. and Mrs. Incredible (Craig T. Nelson and Holly Hunter), Violet (Sarah Vowell), Dash (newcomer Huck Milner) and Frozone (Samuel L. Jackson). Bird revealed details of the upcoming caper, which puts the family into an expanded universe that includes new allies and a brand-new villain. “‘Incredibles 2’ is really a family film, it’s just that the family happens to have super powers,” said Bird. “They may have super speed or super strength, but they experience the same problems as any family.”

“Bob’s actually home with the kids this time and I’m the one out fighting crime,” added Hunter.  She joked, “I’ve been working out 13 hours a day!”

Fans were the first to see the global debut of a scene from the film that pays hilarious homage to the Disney Princesses. Lasseter revealed that filmmakers had asked the original voice actresses behind the Princesses featured to reprise their roles for the sequence, and  in a moment no Disney fan will forget, Auli‘i Cravalho (“Moana”), Kristen Bell (Anna in “Frozen”), Kelly MacDonald (Merida in “Brave”), Mandy Moore (Rapunzel in “Tangled”), Anika Noni Rose (Tiana in “The Princess and the Frog”), Irene Bedard (“Pocahontas”), Linda Larkin (Jasmine in “Aladdin”), Paige O’Hara (Belle in “Beauty and the Beast”) and Jodi Benson (Ariel in “The Little Mermaid”) were welcomed on stage for the largest gathering of Disney Princesses in history.

Walt Disney Animation Studios’ follow-up to 2012’s “Wreck-It Ralph” leaves the arcade behind, venturing into the expansive universe of the internet—which may or may not survive Ralph’s not-so-light touch. Outcasts-turned-BFFs Ralph (voice of John C. Reilly) and Vanellope von Schweetz are reuniting with Fix-It Felix (voice of Jack McBrayer) and Sergeant Calhoun (voice of Jane Lynch). Filmmakers revealed a new character, Yesss, an algorithm who plays an important role in Ralph and Vanellope’s journey within the internet. Golden Globe®-winning actress Taraji P. Henson (“Empire”) lends her voice to the character. “Yesss is a new character who owns the website Buzzaholic,” said Henson. “Yesss knows about everything cool and on trend. And she does spell her name with a triple ‘s.’ Yesss is very savvy, smart and sexy.”

John Lasseter kicked off the presentation by announcing Disneytoon Studios’ original new animated movie, “Untitled DTS Film.” Directed by Klay Hall and Bobs Gannaway, and produced by Ferrell Barron, the theatrical feature film explores the future of aviation—taking moviegoers to the edge of discovery in the air—and beyond. “Untitled DTS Film” opens in theaters on April 12, 2019.

Lasseter invited Pixar’s Josh Cooley (“Riley’s First Date?” short) to the stage, revealing that Cooley has assumed full director responsibilities for “Toy Story 4.” The pair brought with them a behind-the-scenes look at a day in the director’s life at the Northern California studio. Produced by Jonas Rivera (“Inside Out”), “Toy Story 4” is slated for release on June 21, 2019.

Director Dan Scanlon, who helmed Pixar’s “Monsters University,” joined Lasseter to share a few details about an all-new original feature film currently in production at Pixar Animation Studios. According to Scanlon, who lost his father at a very young age, the film is inspired by the question he’s always asked: who was my father? The story is set in a world with no humans—only elves, trolls and sprites—“anything that would be on the side of a van in the ’70s,” said the director. “In the film, we’re going to tell the story of two teenage elf brothers whose father died when they were too young to remember him. But thanks to the little magic still left in the world, the boys embark on a quest that will allow them a chance to spend one  last magical day with their father.”