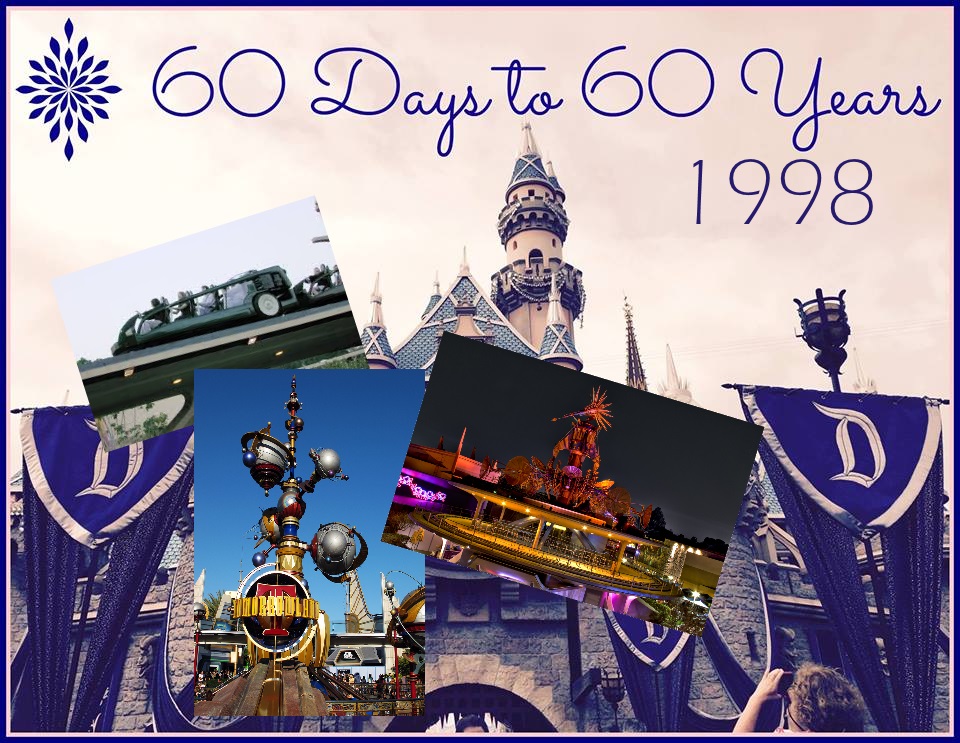 I hope you have been following along on this incredible journey as we explore 60 days to 60 years of Disneyland where we look at a year every day leading up to Disneyland’s 60th. A huge Thank You goes out to the founders of this blog celebration Didi (DisTherapy) and Gayle(DisneyGals) as their orchestration of this event has been amazing.

And now onto the show, Disneyland 1998… oh what a great year…

Let’s first look at the main attraction, Disneyland. In 1998 we could walk through the gate with a one day pass for only $38 adult / $28 child, and Disney the adult years didn’t start until you hit the age of 13(today you are a Disney Adult at age 10).

Disneyland’s major announcement in 1998 was the re-opening of Tomorrowland.

As Walt dedicated Tomorrowland in 1955 he said that Tomorrowland was “A vista into a world of wondrous ideas, signifying man’s achievements…a step into the future, with predictions of constructive things to come. Tomorrow offers new frontiers in science, adventure, and ideals: the atomic age…the challenge of space… and the hope for a peaceful and unified world.”

Looks like the future is painted in golds and dark browns as was Tomorowland. Much of the area remained the same, but a few new attractions were introduced:

• The top new attraction Rocket Rods, replaced the Peoplemover , was meant to evoke a futuristic rapid transit system. Unfortunately traveling fast in the future was not meant to be. Turns out the Peoplemover structure was not built with rapid transit in mind and this put a lot of strain on the old supports. Thus the ride was shut down on many occasions before closing for refurbishment in 2000. This refurbishment continues today as the attraction was never reopened, but as you walk Tomorrowland you can still see much of the track system.
• The icon of Tomorrowland, the World Clock, was replaced by Astro Orbitor. Astro Orbitor is a spinning style attraction similar to Rocket Jets which was replaced by the Observatron.
• Honey I Shrunk the Audience moved in and replace Captain EO
• A new splash area called Cosmic Waves made an appearance for a short time. The water area was a big hit, but many people would visit Honey I Shrunk the Audience after playing in the water and the seats in the theater were beginning to show some damage so the water area was removed and replaced with planters.
• American Space Experience was located directly next to Rocket Rods and celebrated 40 years of NASA. This museum style attraction only lasted until 2003 as Buzz Lightyear blasted NASA out of the way to make room for Buzz Lightyear Astro Blasters.
• Innoventions moved into the Carousel Theater and was recently closed at the end of March this year.
• Technically not an attraction, but the Observatron was added atop the Rocket Rods loading area. This sculpture comes to life by spinning and playing music every 15 minutes.
One addition to Disneyland outside of New Tomorrowland was the evening Mulan Parade to celebrate the release of Mulan in theaters on June 19, 1998.

With all the introduction of new attractions of course there has to be some Good Bye’s here are a few that we waved Good Bye to in 1998:

• Submarine Voyage
• Chip N Dale’s Acorn Ball Crawl
• Hercules “Zero to Hero” Parade
• The Hunchback of Notre Dame’s Festival of Fools
• And technically not an attraction but we did bid farewell to the original Disneyland Parking Lot. The lot was closed to make way for California Adventure, Downtown Disney, and Grand Californian Hotel and Spa.

Not only was 1998 a good year for Disneyland, but also for the Disney Company and my personal life. 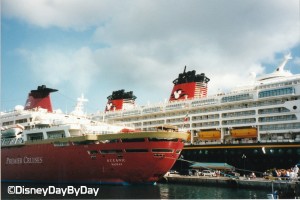 The year 1998 holds a special place in my heart as I was married to my amazing wife who, at the time, was not a Disney fan. Yes I know, I can hear you all gasping, so let me explain. She did love Disney movies so I had that going for me, but she was not introduced to the Disney parks early in life as I was. You see, my family made yearly trips down to Walt Disney World in an RV, stayed at Fort Wilderness, and filled our days with nothing but Disney. Thus her first experience with Disney parks were in the middle of summer with her boyfriend’s family who went from rope drop to the kiss good night and would only stop for one meal. Not the best introduction to the magic. Surprisingly these trips did not scare her away and we went on to get married and somehow I talked her into honeymooning at Walt Disney World and to top it off taking the maiden voyage cruise on the Disney Magic as the Disney Company welcomed the Disney Cruise Line in 1998.   Disney Cruise Line has gone on to be a great success and so has my marriage as my wife is now a huge Disney fan and is wanting to go just as much if not more than I am.

With that I wish Disneyland a Happy 60th, here is to many more to come. Be sure to take some time to visit all the amazing bloggers below… #60DayTo60YearsAtDisneyland