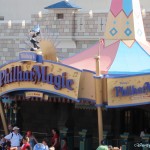 In our family, we’ve never been one for sitting and watching a show when we could be on a thrilling ride. So for many years we actually skipped Mickey’s PhilharMagic, a 4D movie featuring Donald Duck. Skipping this movie was certainly our loss! After hearing many positive comments about PhilharMagic, we decided to give it a try. It’s now on our “must do” list every time we visit the park.

Mickey’s PhilharMagic is a 12 minute movie featuring Donald Duck, Mickey Mouse and clips of musical numbers from a variety of Disney movies. What makes this show spectacular are the 4D special effects. You’ll be lightly sprayed with water, you’ll smell the delicious scent of cherry pie, and by wearing the special 3D glasses the characters will become so realistically dimensional that you’ll see many audience members reaching out to touch them. At the end of the movie don’t miss the Robotic Donald in the wall behind you. Children love this movie and adults seem to enjoy it as well.

If you do go, here are a couple items to brag about or mention to people in line so you look super smart.   The screen in PhilharMagic is the largest seamless projection screen in the world.   It is 150 feet long and 28 feet high.   The movie is also the largest cast of Disney characters to ever be featured in a single 3-D show.    How’s that for impressive.

As a precaution, it does get dark and loud in the theater so toddlers and babies might get scared. But the wait is rarely long and after being in the hot sun all day, sitting down in an air-conditioned theater is the perfect way to spend a few fun-filled moments.

As we said, we did pass this one up for a couple years, but do really enjoy it.   Give it a chance on your next trip.