Continuing from last week’s 1987 visit.   As you entered the park the turnstile would print out a ticket (seen below) indicating if you won a prize.   It was said that there was a prize given away every 15 seconds at either Magic Kingdom or Epcot.   Prizes ranged from buttons, light up visors, to one day tickets to the parks (Magic Kingdom, Epcot, or Discovery Island)   Yes Discovery Island, how many of you remember this? 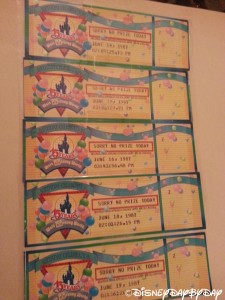 Discovery Island??   Well, if you have traveled across the Seven Seas Lagoon you have passed it.   Originally called Treasure Island, Discovery Island was a 12 acre island which allowed guests to visit and get up close and personal with wildlife.   The island was open to the public from 1974 to 1999.   After closing all the animals were moved to the Animal Kingdom and you will notice that the Discovery Island name moved with it and is now the home to the Tree of Life.