On Thursday we check into the Grand Floridian to celebrate our 15 year Wedding Anniversary.   So this week I thought I would offer up a couple interesting facts about the resort.   The resort opened in June of 1988 with the name of Grand Floridian Beach Resort.  Not a huge name change, but in the fall of 1997 the name was changed to Disney’s Grand Floridian Resort & Spa.   The resort features 867 rooms.

The Grand Floridian was modeled after many of the beach resorts built along Florida’s coast during the 19th and 20th century.   The resort stands today on land that was meant to be Disney’s Asian Resort.   The Asian Resort was planned during the 1960’s and was expected to open in 1974, it even appeared in advertising before the property opened in 1971.  Ever travel down Floridian Way?   Well you are actually traveling down a road that was originally called Asian Way.

As you walk into the 5 story lobby and see the grand beauty of this resort, pick your jaw up off the floor, then take a look at the two chandeliers.   How tall do you think these are? 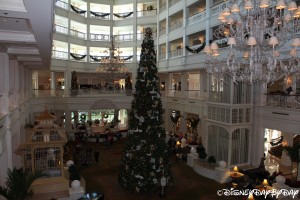 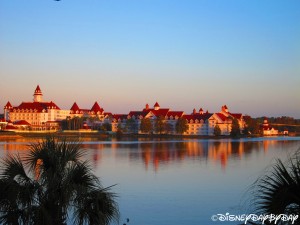 These two chandeliers are 16 feet tall, so those of you who picked the tried and true method of “when in doubt pick C” are correct.   They are also 14 feet wide, contain 44 candelabras, and weigh in at one ton