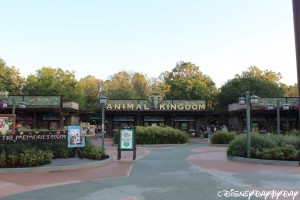 Opening in April of 1998, Animal Kingdom is the forth of four parks at the Walt Disney World Resort.    At 580 acres it is also the largest park, Magic Kingdom could fit within Kilimanjaro Safaris itself.

The Animal Kingdom is made up of seven areas arranged in a pattern similar to a Magic Kingdom’s spoke and wheel.   The center point being the Tree of Life where all others areas branch from :