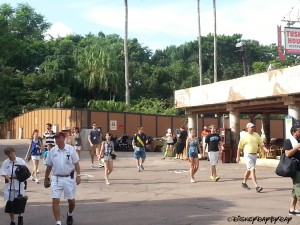 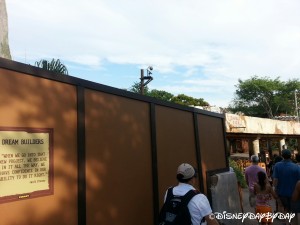 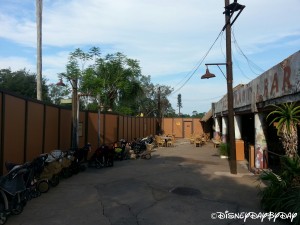 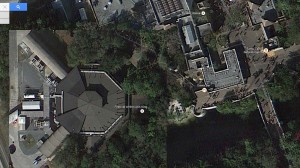 Today’s Hidden Mickey Monday is from Animal Kingdom’s Kilimanjaro Safaris.   As your safari reaches deeper into the animal kingdom, many people are on the lookout for animals.   But have you spotted this giant Hidden Mickey? 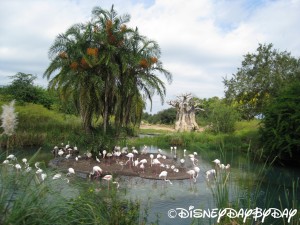 As you enter Elephant Country and spot Flamingo Island, be sure to take a close look at the shape of the island.   Yes it’s a classic Mickey shape.   As build up occurs around the edges, cast member re-dig the sides to ensure it maintains the Mickey shape.

Want more Hidden Mickey’s, check out our friends at Frontierland Station for a full body Mickey this week. 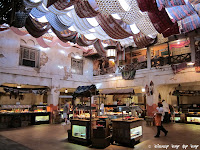 The Tusker House, previously a counter service location, currently offers a buffet for breakfast,
lunch, and dinner.   One of the more popular meals is the character breakfast, “Donald’s Safari Breakfast”.   The breakfast includes characters meets with Donald, Goofy, Mickey, and Daisy (subject to change of course) along with a buffet of Mickey waffles, scrambled eggs, ham and flavorful dishes with an African influence.
Mark your calendars;
Tusker House will soon be adding Donald’s Safari Lunch (December 4, 2011) which
will be a new character dining experience for Animal Kingdom. No changes will
be made in the buffet at this time.
Our review will
concentrate on the Safari Breakfast, the only meal we have experienced at the
Tusker House. 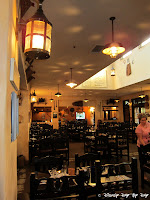 Welcome to Tusker House!   Smile for your picture.   Now shove that food down your throat and get out.
Atmosphere
Once your name is called you will be ushered into a line where you’ll wait to get your family’s picture with Donald.   After you get your picture you’ll be seated.   TIP:  Be sure to ask to have a cast
member take a picture with your camera as the pictures offered while you eat
will cost over $30. 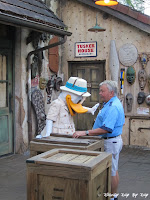 Similar to other character style buffets,  this buffet is a bit loud and feels incredibly rushed.   The building is not as unique as other buildings on property but does have some
cultural flair to help you feel as though you are in an African
Village.    Be sure to look up at the ceiling as you grab your
food from the buffet.
The buffet is free flowing, meaning there is supposedly no line.   This seems to cause
confusion even though cast members mention it over and over.   So if
you go, remember, don’t line up, just get the food you want and smile at the
people giving you dirty looks.
Food 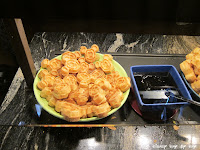 Food is average buffet food, nothing spectacular and, not as good as some of the other
breakfast buffets on property including the Supercalifragilistics Breakfast at 1900 Park Fare.   But if you like Mickey Waffles, scrambled eggs, and sausage you’ll do fine.   Be sure to try the Jungle Juice as it’s one of the best parts of the meal. As you sit, you’ll be visited by Mickey,
Goofy and Daisy who will quickly sign your book, take a picture and be on their
way. There’s also a parade in which children can line up behind their favorite
characters and dance along to African music.
Tip:  If the park opens at 9 be sure to make an early reservation to the Tusker
House.   This will allow you to get into the park a little early and
snap some great photo’s with few people on your way to the
restaurant.   You are not allowed to roam the park, but you do have a
view of the tree of life and other nice spots on your way.
Our Rating is 2.5/5

Rating Reason:  There is a certain aura of anxiety when dining with characters at Disney restaurants. Even when the servers are as kind as can be, you know they want you out as soon as possible so they can get the next gazillion people in to eat. It’s usually not a problem, but at no other restaurant have we felt more rushed than Tusker
House. Maybe it’s because we schedule an early breakfast, so they are just
trying to get all guests in and the process flowing, but it often leads to an
aggravating meal.    Donald no longer comes to the tables, so getting
his autograph can be a problem. And of course there’s always the pressure of
buying that expensive photo. 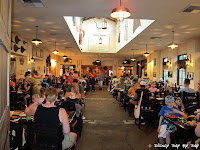 Overall, the food is decent and
it provides a good fill up at the park before your day
begins.    Also, if you get in before park opens you are right at the entrance to the Safari to begin your tour of Animal Kingdom and eating
with characters is always easier than standing in
character lines in the hot Florida sun.  But
because of the frantic pace, you might end up feeling overly rushed.