Tiggerific Tuesday Trivia: Wait, am I outside the park?

What attraction at Disney World’s Magic Kingdom is entirely outside the park (outside the train tracks)???  Hmmm think hard.   Have you ever ridden the train and sat on the left side, don’t see much, do ya?    Except after you leave the New Fantasyland station… wait for it…..wait for it….. There it is, Space Mountain.   Don’t believe me, take a look at the Google Image Map Below. 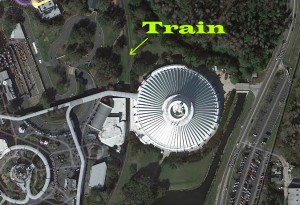 The attraction went through many different design changes before the current layout was selected.   Originally it was supposed to be in the southern portion of Tomorrowland similar to Disneyland’s placement.  What ended up there?   You guessed it, the Carousel of Progress.   So now, to reach the attraction we travel through the star corridor which is actually an underground tunnel taking us under the train tracks and technically outside the park.

Tiggerific Tuesday Trivia: What do the PeopleMover and Rock ‘n’ Roller Coaster have in Common??

Did You Know Today’s TIGGERIFIC TUESDAY TRIVIA On what the PeopleMover and Rock ‘n’ Roller Coaster have in common??

If you guessed wait times, you are incorrect.   The PeopleMover is propelled by a Linear Induction Motor (LIM) which is the same system used to propel the Rock ‘n’ Roller Coaster to 60 MPH.   Though the PeopleMover never reaches a speed over 7 MPH, the linear motors use an electrical current to create an electromagnetic field.   The PeopleMover vehicles have magnets on them and the interaction with the magnetic fields create propulsion and move the vehicles along the track.  The system is great on the environment and also on repair costs as fewer parts break down due to friction. 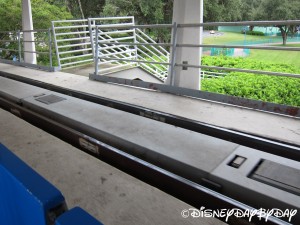 Did You Know Today’s TIGGERIFIC TUESDAY TRIVIA About the Tomorrowland Speedway? 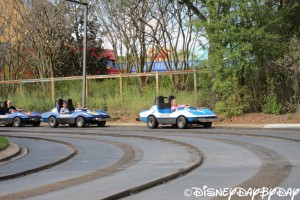 I can’t drive 55, err 7.5 mph.   Did you know that when you slam that pedal to the metal on the Tomorrowland Speedway you are going a whole 7.5 mph!!!   No, there are no cops on your tail so feel free to sit back and enjoy the ride but avoid the rail otherwise you will be bounced back and forth on the track.

Tomorrowland Speedway is one of the original attractions at Disney World opening in Oct of 1971.   There are around 140 cars that can be used on the 4/10 mile track.

What is this spinning rock in Tomorrowland?

You have walked by it, you have observed people running their hands over it, you have thought – “What the heck is that?”  It’s the Kugel Ball!   Sure, now it all makes sense, right? 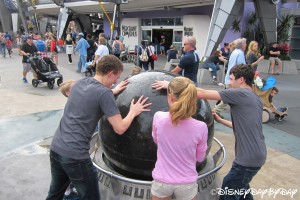 Who doesn’t want to go home from vacation and say that they stopped a 6 ton granite ball?   So, next time, don’t just pass by, join in the fun and stop the ball and change its direction it just may change yours.

Head to Tomorrowland to ride the highest ride at Magic Kingdom, Astro Orbiter. The line for Astro Orbiter actually starts on the ground below The People Mover. Once you get through that line, you’ll be ushered into an elevator and head upstairs where you’ll wait in another short line. Astro Orbiter is made up of “space rockets” attached to arms that go in fast circles much like our children after eating too much Disney Cotton Candy.

Why should you go on this ride? It’s got a great view of the park and the high speed is perfect for thrill seekers. If you like to feel the wind in your hair, you’ll enjoy this.

Why should you skip it? If you’re afraid of heights or get motion sickness, you might want to skip this one! It’s a pretty simple ride that merely goes around in a circle, but the fast spin may make your stomach queasy.

By far the most annoying thing about this ride is the long line. In fact, this is one ride we often end up skipping as we’d rather spend our time elsewhere. If the line is too long and you end up skipping it, don’t fret, you’re not missing a whole lot. But if you have time, it’s definitely worth the ride.

Rating Comment: If there is a short line and you aren’t afraid of height this is a fun ride. Great vantage point to see Tomorrowland, the Castle, and part of Fantasyland