It was in 1934 that Mickey Mouse was introduced into what was then called the Macy’s Santa Claus Parade, today known as the Macy’s Thanksgiving Day Parade. 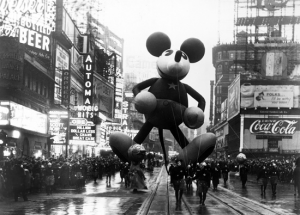 The balloon was the biggest ever produced by Disney at over 40 feet tall.  The balloon was hand painted and included  a star on his chest for the Macy’s logo.   There were 25 handlers each dressed as Mickey or Minnie.   The parade in 1934 didn’t just include Mickey, it also contained a smaller Pluto balloon, a Big Bad Wolf, a Little Pig, and a Horace Horsecollar to round out the Disney lineup.

Disney has been included in all of the Macy’s days parades often times celebrating major milestones of the company.   Donald Duck debuted in 1935 and joined hands with Mickey in 1972 to celebrate the first anniversary of the Walt Disney World Resort.   Donald also celebrated his 50th birthday in the 1984 parade.   Santa Goofy joined the parade in 1992, and in 2000 the Bandleader Mickey balloon had the amazing honor of leading the first parade of the new millennium.

One of the more recent Disney balloons include the Sailor Mickey balloon in 2009 and 2010 celebrating the Disney Dream and Fantasy cruise ships.   In the 2013 Parade you will see Buzz Lightyear in his 6th Parade, Buzz was the first balloon to use clear material.   Spider-Man will also be included in this years parade from the Marvel side of Disney.

What is your favorite part of the Macy’s Day Thanksgiving Day Parade? 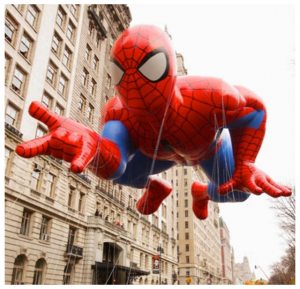 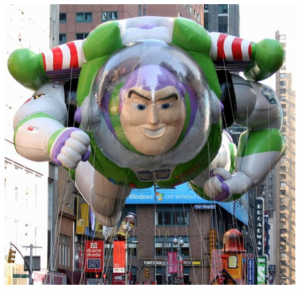