Last week I mentioned Discovery Island which was open to the public from 1974 to 1999, but how did you get to the island?   Well, you sailed the Southern Seas (II).   The Southern Seas (II) was built at the Disney Central Shops and Drydock and put into service in 1977.   A picture of the ship is below (from a postcard purchased when I was a young lad), notice the side paddlewheels which were the propulsion for the ship. 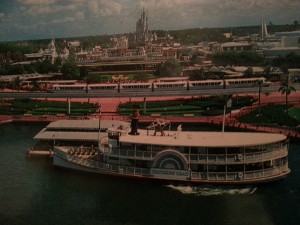 The Southern Seas (II) made hourly trips taking guests to Discovery Island and also over to Bay Lake.   After park close she was used heavily by Conventions.    After EPCOT Center opened in 1982 usage dropped as guests traveled to EPCOT rather than to Discovery Island.   Even with the day time guest drop off the Southern Seas (II) still maintained good convention traffic until 1996.   In 1996 the ship was in much need of a rehab and the costs could not be justified.  It was removed from the water and remained in Drydock for about a year before the decision was made to scrap it.